When W. S. Burroughs and his three moneyed associates formed a company in St. Louis in 1886 to market Burroughs' invention, they named it the American Arithmometer Company.  This turned out to be a poor choice of name since few people could successfully spell (or even pronounce) "Arithmometer." 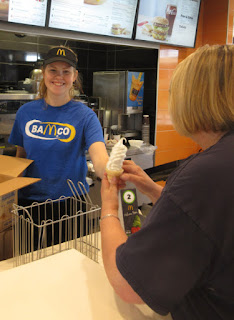 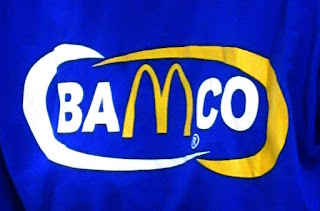 Apparently the name is now used by BAMCO, Inc., the local McDonalds franchisee in Mankato.  I don't know if they have battled for the legal rights with other folks like the Bon Appetite Management Company.


Similar name confusion exists with the name Datatron which now is usually associated with a game in the form of a card-based game, Morphtronic Datatron.

Likewise, ElectroData searches will usually lead to the Electrodata company a manufacturer of communications testing equipment.

Research Is Hard Work - and it Takes a Lot of Luck

When I put together my Datatron Maintenance Page on the Burroughs 205/Datatron site, I mentioned Bill Oller, the Pacific Power & Light maintenance engineer.  Bill gave me my first "computer job" in the fall of 1963 - testing a couple of hundred tubes that he had ordered for his preventive maintenance routine on the University of Portland 205.

I wished I had a picture of Bill to include on that page and spent a good deal of time trying to locate Bill or his family all to no avail.  (It turns out that Bill passed away in 2002 in the Coeur dAlene Idaho area).  I wasn't even sure of the correct spelling of his last name.  But as luck would have it, today I came across a picture of Bill and the PP&L tape subsystem.

I was browsing The Oregonian website for some family history information.  The Oregonian does not participate in the major newspaper archive sites that are so easily searched and show up in response to Google searches; they have their own archive with a rather clumsy interface and sell access by the day for low volume users such as I.  After finding my relative's obituary, I did some computer history searches looking for the words "computer" and "bank."  This turned up some useful history of a pioneering U.S. Bank project to automate account posting.

From January of 1957 in The Oregonian:

Announcement that the U. S. National was making use of the electronic computer on an ex­perimental basis in connection with the operations of its Sheri­dan branch was made in The Oregonian last November. At that time it was believed to he the first bank in the world to start posting its checking ac­counts with an electronic brain.

John N. Raleigh of the bank's "methods" department had developed a branch posting system on an IBM 650 - he called it SONIA. (System of Numeric Integrated Accounting, likely inspired by BofA's ERMA acronym)  SONIA was good for the bank and very good for Raleigh - he was later to become president of the San Fernando Valley Bank.

As I later read a 1960 article that also mentioned the bank system, my eye was drawn to two accompanying photographs.  My eye naturally went first to the five young ladies in bathing suits who were marveling at the the IBM RAMAC disk drive.   Have you noticed that the 1950s computers always featured an attractive damsel at the console?  Jantzen, the Portland swimsuit manufacturer, went them one - no, five better!  Jantzen's was most likely the most popular booth at the Business Machine Show. 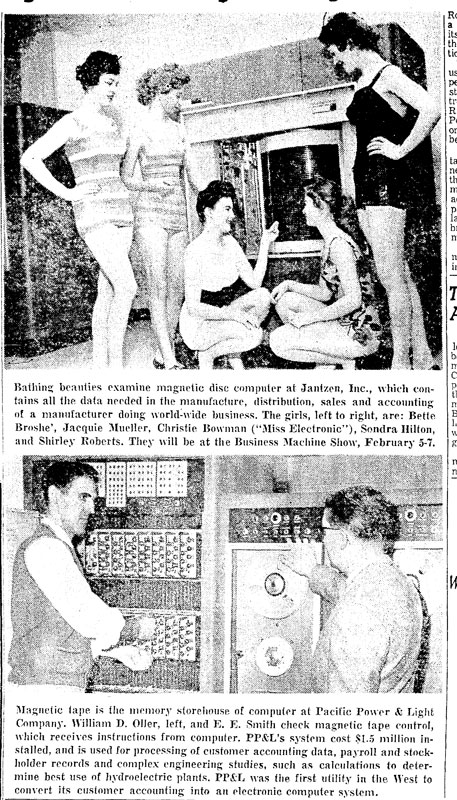 But there, just below the ladies and the RAMAC, stands Bill Oller with his hands on a Datatron pluggable unit in the Tape Controller.  I now have my picture for the maintenance page.

The Jantzen picture will doubtless reappear on a disc storage page on the site in due time.