If you are reading this blog, you undoubtedly have an interest in early computers. I have a large collection of books on the subject but recently came across a great addition to my library. The First Computers, History and Architectures - edited by Raul Rojas and Ulf Hashagen is an outstanding work.

This book resulted from papers presented at the International Conference on the History of Computing in Paderborn, Germany, in August 1998. It is notable for containing first-hand or nearly first-hand accounts of developments in America, England and Germany in the 1930s, 40s and 50s.

The first part of the book, unfortunately, could put the reader to sleep and result in even a serious student of the subject never reaching "the good stuff." But once I hit Harry Huskey's paper on page 69, I realized that I was seeing first hand reports with details not previously published. Details on both the Eniac and the IAS computer at Princeton filled a lot of gaps in my knowledge.

The parts of the book dealing with both British and German development shed a lot of light on important developments that are frequently omitted or only superficially covered in many works.

Highly recommended!
Posted by T J Sawyer at 6:04 AM No comments:

Shortly after Burroughs acquired ElectroData Corporation in 1956, Burroughs employees Douglas Bolitho and Martin Klein hit on a public relations strategy that will preserve the Datatron name long into the future.

Using well established mathematical rules of music composition, they developed an automated music composition program for the Datatron. Burroughs took one of the resulting compositions, hired popular composer Jack Owens to write lyrics for it and created Push Button Bertha. 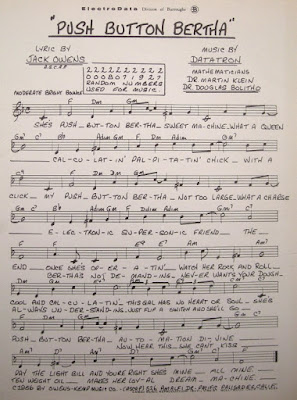 (Click to enlarge)
The result was a program and song cited to this day in PhD dissertations, foot-noted in books on electronic music and preserved for posterity.

I realized the significance of this composition when I was contacted in January by Dr. Lutz Neitzert who was preparing a short radio broadcast incorporating the history of "Push Button Bertha."

And did I say "preserved for posterity?" Well, yes!. The Charles Babbage Institute at the University of Minnesota contains a copy of the Datatron program that was written by Bolitho and Klein. I am currently building a Datatron emulator in Java. (I've had a previously completed version of the emulator running in Visual Basic but want to make it easier to distribute.) I had thought that the ultimate proof of emulation was to run the Algol 58 compiler. I now realize that I will have to add the music composition program to my test bed.

For readers with sharp eyes and a good imagination, there is a barely visible copy of the Push Button Bertha score at this site.
Posted by T J Sawyer at 4:19 AM 2 comments: